My first direct encounter with small Podengos happened in 1970. At that time, I was assisting Dr Antonio Cabral, President of the Clube Português de Canicultura (the Portuguese Kennel Club referred as CPC) in his quest to bring back from extinction the Cão de Agua or Portuguese Water Dog. A keen dog person, Dr Cabral was determined not to allow ancient Portuguese breeds to disappear and among them the Podengo Português Pequeno (at the time the only known variety was the smooth) of which there were few examples. At the time he owned 2 PPS males, OLE and OLA de ALVALADE very lively and quite good-looking little dogs which I found charming; however, he had no females and had difficulty in breeding these dogs. Little did I know at the time that a few years later Podengos would become an important part of my daily life and that I would own and breed so many!

My second and more productive encounter with the PP was in the late eighties. I “inherited” the task of preserving the Portuguese breeds by becoming the President of the CPC in 1985 and was the top breeder of Portuguese Water Dogs under my VALE NEGRO kennel name. In my task to help preserve the Portuguese native breeds I was at that time assisting the Administration of the Lisbon Zoo by running their Portuguese breeds Kennel under the “do Zoo de Lisboa” affix where examples of all the breeds were on display and where puppies were occasionally born and sold. As luck had it, the President of the Board of the Zoo was D. Pedro Palmela, Marquis of Holstein Beck, himself a keen dog person whose greatest passion were the PPPs. He had been breeding from the Ruy d´Andrade old “Font´Alva” lines for many years, a passion he still has today as he owns several of these little dogs, of excellent breed type, in his home in Sesimbra.

D. Pedro Palmela had been privately breeding PPPs for many years, as hunters and companions, and he knew how these dogs should be constructed. At this time, there were very few dogs of this breed were officially registered in the CPC studbooks. I was very fortunate to be able to register his dogs as foundation of this breed in the CPC and to be given a chance at helping its selective breeding. From listening to him, I learned the desirable points of the breed and the many qualities of these little dogs as well as their hunting capacities. His deep knowledge of the breed never cesses to amaze me even today.

For the following years, I occasionally bred and produced puppies and my two best dogs of that time were Goroto´s son out of “Salsa d´Albergaria”, “OREGÃO DO VALE DO POCO”, who became a multi champion in Portugal, Italy and Brazil as well as my main stud at Vale Negro. His daughter out of “Beu Beu do Zoo de Lisboa”, “Port CH Bolacha do Vale Negro” was a beautiful example of PPS of the time (1990). From this combination of lines several dogs went to Finland to Paula Kangassalo (of Zlazano) and became the foundation of the smooth PPPs in that country while others were successfully shown in Denmark and Italy.

My first wire was a tiny bundle of joy called BRIACA who was so small she was named
MINI for the rest of her life and became the beloved companion of my daughter Catarina
who dressed her up in her dolls clothes and declared her the Queen of her room. Mini was
Agility trained by Catarina and it was a very sad day for all of us when we lost her at age 11
from sepsis. As a show dog, she finished her Champion title but as a producer she was never
successful in producing puppies of good type, so she has left no offspring. But she was a
wonderful companion, so intelligent and full of herself, in spite of her minute size, the true
queen of the house to her very last day, plus she had no fear and was a keen protector of our
home!

However, from her breeder I had also purchased two dogs who became foundations of the
breed for my kennel and appear in most modern pedigrees of the PPW, making history for
this breed. The first dog was MIKI DA FONTE QUENTE who achieved his CH PORT. Title
quickly and was a beautiful dog of great temperament. The second dog and a full younger
brother to Miki was Ch PIPOCAS DA FONTE QUENTE who also became a well-known
stud a Vale Negro.

I had also just purchased HERA DA PRAIA DO RIBATEJO a beautiful smooth bitch
,sandy yellow and white in colour, of exquisite breed type which was only sold to me
because she had a black although champion mother and which , I am pleased to refer ,
never produced any dogs in either first, second ,third or fourth generation of this colour!
Hera proved to be for me a great acquisition, she had a wonderful outgoing happy
temperament, became a champion quickly and produced beautiful puppies! She became the
foundation of my wire breeding when bred to Ch Miki da Fonte Quente. Indeed, she
produced by beloved Port Ch MOSCATEL DO VALE NEGRO, a lifetime companion who
still shares my home at age 13 and has produced an array of beautiful puppies, many to
become champions and the foundation to many successful kennels in Portugal and abroad.
But Miki´s heritage proved to be two folded. Not only did he produce MOSCATEL and
many others for me but I later sent him to Finland were he achieved many titles and where
had many offspring, and I exchanged him with a dog born in Finland who was crucial in
establishing at VALE NEGRO the type of PPW I breed to the day. I am referring to PORT
CH GRITTY´S FANDANGO a son of CH COWBOY DE GILFORD and CH QUIKA
D´ALBERGARIA. A lively, beautifully headed solid red dog of small size and perfect rough
coat texture Fandango was an outstanding stud. In his direct pedigree was the mixture of
two Portuguese lines of PPW that had never been mixed before in Portugal as they came
from two important breeders, Antonio Rogado and João Bessa, who always refused to mix
their lines of dogs. From the breeding of Fandango to the Rogado bred bitch VALSA my two
first Wire Champions were born, CH ULISSES DO VALE NEGRO and CH UVA DO
VALE NEGRO and both appear in many modern pedigrees.

The next important association came with my meeting with Dr Rogerio Pinheiro and his
Lapa do Lobo PPW. We became instantly friends and I treasured his visits to my kennel.
From him I purchased two bitches that gave me outstanding puppies in many different litters
with different sires. BELA DA LAPA DO LOBO and CH CIGARILHA DA LAPA DO
LOBO will leave a heritage in this breed that will be recognized in many future generations.
I also used his stud PIRUCAS and he also used my dogs MOSCATEL DO VALE NEGRO,
his son out of Ch Uva do Vale Negro, EVARISTO DO VALENEGRO and my CH Pipocas
da Fonte Quente son, JACARANDA DOVALE NEGRO. We mutually benefited from our
individual breeding programs and I admired his work in this breed until his untimely death in
2005. No wonder many of his dogs are behind the lines of breeders of PPW around the world
as he was a very successful breeder.

As the President of the CPC I have found it impossible over the years to handle and exhibit
dogs at shows on a constant basis and consequently do not regularly show my PPS.
Nevertheless, I have owned or bred 15 Portuguese Champions and many international
champions and winners including World Winners, European Winners and BIS Winners carry
the VALE NEGRO kennel name. Moreover, many of top winners in my country and abroad
are either sired or produced by a Vale Negro bred dog or bitch which have been the
foundations for several well-known kennels of this breed in Portugal and abroad.
This is the heritage I have strived and succeeded to achieve in this beautiful breed. 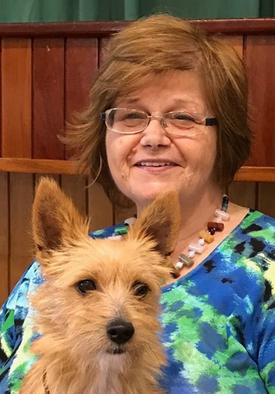 Breeder of Wire and Smooth PPP since 1985

Author of  "A Breed Presentation" for Judges and Breeders​

Carla's Story - In Her Own Words 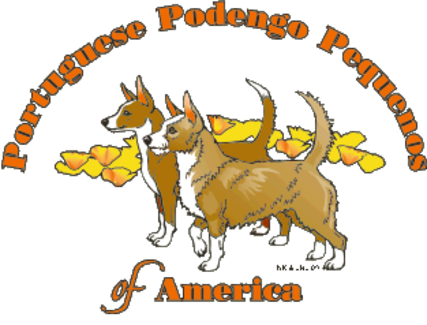